The Big Ditch
I do not pretend to know the ins and outs of how best to fish the Cape Cod Canal. I’ve always preferred to fish the open ocean at night on a new moon with some rough water. That said, it is hard to ignore the potential of the Canal, especially in late July and August when the surf can be dead while the Canal is on fire! Here are two views on fishing the Canal – mine and fellow Bay State angler and frequent Canal fisherman, Paul Ancelli’s – and how big water pikes can break through the clutter of smaller fish.

My Story
After a spectacular 7-week stretch of Canal fishing in 2017, I decided it was worth investigating. I wondered if I had the time or motivation to learn a new spot and, essentially, a new type of fishing. My wetsuit – an advantage in the surf – would be of no use in the Canal. On the plus side, I did have a spare mountain bike that I had rigged with a milk carton and rod holder, initially to ride around Cuttyhunk. So in October 2017, on my way to Block, I spent 4 days at the Canal. The reports said there were no fish and they were right. I used those days to scout, to get a feel for the tides and the terrain of the Big Ditch. I realized that this was going to be a long process. I did not intend to spend weeks at the Canal, but I could do day trips, and once there, rely on my bike to move around. And, true to fishing form, I was optimistic that I would eventually catch a decent fish!

2018 did not bring the same consistent fishing action in the Canal as in 2017. The fish were in and out but did not stick around as they did during the prior year. I picked an August day that fit my schedule and invited my wife, Patricia, for a drive to the Canal. We left the Berkshires at 8am and arrived at the Bourne Bridge around 11am, not a prime fishing time! Patricia dropped me off to fish and went antiquing along Rte. 6a, with plans to meet back up at 4 PM.

I made a quick stop at the tackle shop and talked to a guy that said there had been fish everywhere that morning. He was buying plugs to restock is plug bag. There must’ve been some bigger fish because they cleaned him out. 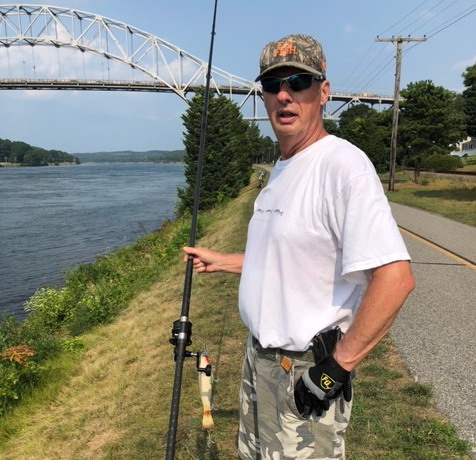 Gary at the Canal

I got down to the water, rode a short way and stopped at the first fisherman I came to. Figured I’d watch him and get the lay of the land. After a few casts he turned around and said “Hi Gary!” Turns out it was Anthony Kotoun from Newport, who stayed with me 4 nights in the spring at Block. It was his first time fishing the Canal. We both wanted to see more of the terrain, so we spent the next couple of hours riding and fishing. Anthony caught some small fish on a SP Minnow, and I practiced casting my bigger plugs and getting a feel for how they handled the current. It was bright sun and I was worried about sunburn – not something I ever thought about fishing the surf at night.

After lunch the canal was full of walkers and bikers but pretty much void of fishermen. It made sense to me, mid-day under a bright sun, but in reality it could’ve been the tide which I know very little about in the Canal. Go figure. This is when things started to get interesting.

As the water dropped, we started seeing more bait moving along the shoreline. We hung around a big school waiting for the stripers to find them, but moved on when none did. We saw occasional splashes of feeding fish in the middle of the canal and started to see mackerel moving along the shoreline. At one point, Anthony mentioned that his personal best was 41” and I remember saying “it will stay that way if you keep using that SP minnow.” A little while after, he put on a Giant Medium Diver in Atlantic Mackerel and hooked into a nice fish!

Anthony’s quick hit reinforced my belief that my bigger plugs and my diving plugs could be very effective in snagging bigger fish in the Canal. I have always felt that similarly-sized fish school together, but this does not seem to hold true in the Big Ditch. I can’t think of any other place where fish of all sizes are feeding together. My big plugs can weed out the smaller fish and my Divers can get down to where the bigger fish are feeding.

After a while, we moved East on the Canal and Anthony was just down the shoreline from me and was getting some hits and caught another decent fish. I looked down and there was a small school of mackerel swimming in a tight circle right at my feet!! I flashed back to a sand flat in Florida years ago when a small school of mullet did the same thing in knee-deep water. I had no idea what was going on until seconds later several 4’ barracudas slashed through them. I jump back into the present as the barracudas turned into stripers, smashing into the mackerel!

I yelled to Anthony and made a cast with the plug I had on, a Surface Giant “White over Yellow” with the hand and foot prints of my newest grandson, Conor, inked on it. 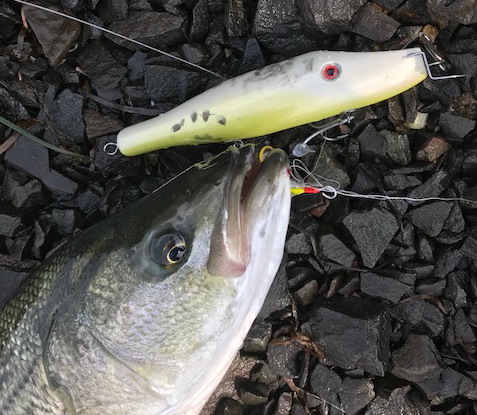 I only had to cast about 10’ or I would overcast the fish. These were not the smaller fish we were catching earlier in the day! A fish hit my plug immediately after it hit the water, but before I could engage the reel and strike the fish, it was off. As the plug floated back to the surface, another fish grabbed it, ran a short distance and came unhooked! I had not even turned the reel handle yet. And then the plug got hit again, this time I set the hook into something solid and the fight was on. Next, it looked like another fish was fighting for the plug, and then I realized I had 2 fish hooked on the same plug at the same time! I managed to wrestle them to shore and as I reached down, the bigger fish got off and swam away. They were both going back in the water anyway, but it would’ve been a great picture.

Just like that it was over. It happened so fast that Anthony did not move. He just laughed at the astonished look on my face. To think that it all happened within 10’ of shore in what felt like seconds!! The mackerel scattered and the stripers vanished.

We rode and fished for another hour or so, but caught nothing else. Soon, Anthony biked off with his “dinner” and I rode to meet up with my wife. I have to say it was fun to see and catch stripers during the day. I really appreciate the colors. Fishing in the Canal goes against everything I’ve learned about striper fishing – that’s what makes it unique and alluring. If I can avoid the crowds, I will be back!! 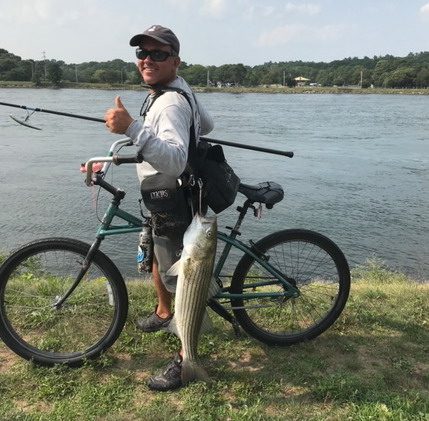 Fishing the Big Ditch, Paul Ancelli
In 2018, because I’m of the same mindset as Gary (big bait, big fish), I set out focused on throwing big GRS lures in various sizes. I have fished this way in freshwater for a few years now with big swim baits. So, I fish Gary’s Trollers in many inlets with strong currents – and one in particular, the Big Ditch as we locals call the Cape Cod Canal.

The Troller is a lure I can work on top, in the mid-water column and get a lot deeper than your typical pikie. Given its size and action, it really stands out to the bigger fish cruising through the Canal and inlets, and attracts bigger, better fish while other lures in my bag only attract the smaller fish. The Troller is my go-to lure when I get to a spot and fish are not noticeably breaking on the surface – which is most of the time if you are like me and try to fish whenever you have free time.

When I get to my spot, I pull a Troller out of my bag and lean into a cast up current, reel fast until I pick up my slack and feel the lure thumping in the water. This way I know I’m in and I will continue to work the lure along the strike zone which are the steep drop offs that run along the edge of the Canal. It will also work the same on jetty fish or anywhere with strong current. It is very versatile. As we know, bass scour the edges of these drop offs looking for an easy meal such as mackerel, crab, lobster, tog, and any other bait fish passing through the Big Ditch. In other words, the big Troller is a good way to match the hatch. In strong currents, you can get these lures to your preferred depth and keep them there with little to no effort, letting the current do the work.

People often send an odd look my way as I ride by them on the Canal bike path with my big, fat Troller attached to my rod and reel instead of a pencil popper. One morning along the Canal, among hundreds of anglers, I noticed people bringing up schoolie-sized bass. I had also noticed that everyone was throwing top water plugs. I wanted to get through these smaller fish to see if there was anything bigger holding deeper below them.

Low and behold, my first cast I was into a 25 lb. fish that hit my Gibbs Blue Mac Troller Medium Diver and put a solid bend in my rod. After hooking a couple quality fish, I let my friend I was fishing with throw my other Troller and, shortly, he was hooked up with a solid fish, too, and is now a believer.
There are very few lures that can impart the action that a GRS Troller does diving to the depths of 15 feet and coming in at about 10” long. If you’re looking to catch a big fish then you better have a big bait to offer up and the Troller gets my vote! 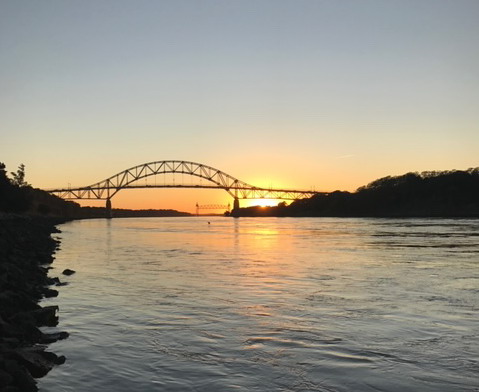 Sunset at The Big Ditch