Commando Night + Who Are Those GRS Junkies?

With the season winding down or over for many of us, I’m sharing my last  hurrah – a Commando night on Block Island.  Plus, learn more about the Facebook group, GRS Junkies…and a few more fishing gems beyond the North Atlantic coast. Finally, I’ll be having a sale of Jeweled Pikes in mid-December. For all the goods, read on…

Block Island Commando Night
When I do a Commando trip (traveling and fishing in a single night) it is usually a crap shoot. I pick a night that fits into my work and family schedule with, hopefully, some moon or weather influence though not a lightning storm. This was the case for my Sunday night commando trip this past August 26. It was a Sturgeon full moon, didn’t catch any of those, but as you will read, it was a fishy night. The night was going to be bright, so I was hoping for some cloud cover on the Island. The tides were good – high when I got out there – and outgoing until 3am. I reached out to a few people to join me but, in the end, I went by myself. It was a true Commando experience – no vehicle, walk on the ferry and walk to my spots when I arrived on Block.

It’s always good to have a plan and with a 3-1/2 hour drive to the ferry there was plenty of time to formulate one. In my mind, I picked four spots to fish, and, as with all best laid plans, it remained to be seen how long I could stick to it. On the way to my first spot, I came upon a father and son. Looked like the son (around 14 years old) was hooked up and the father was sitting on a rock near him. In passing, I said “Hi” and the father mumbled something about catching small bass and blues, so I was hopeful that there were bigger fish around! I briefly thought about joining them but I stuck to my plan. My first spot (that I often fish) was a low jetty with easy access to deeper water at its end. It is the spot where I first test swam my Pike Weasel and it is two spots short of “my rock” which I hoped to eventually get to. But, to keep the fish honest, I decided to take a few cast at my first planned spot.

This is when things got surreal which, of course, I blame on the full moon. I stepped onto the jetty, and looked across the cove toward “my next spot.” There was a red light on the beach but it was close to shore, not out on the rocks where I aimed to fish. Then, in the blink of an eye, my night changed when I glanced down:  it was high water on the full moon tide and the water was even with the top of the jetty. It was flat calm and a bright moon, no clouds. The water was inky black; I could not see down into it. That is when a full-sized bunker swam right up on the jetty next to my foot! I looked to my left and there was another bunker lying on top of the jetty. I looked out over the water and there was nothing disturbing its flat calm surface. I was in a little bit of shock as there was nothing in my plan to prepare me for this. I was expecting a long night of swimming to rocks searching for fish, now with little effort I was presented with big bait. 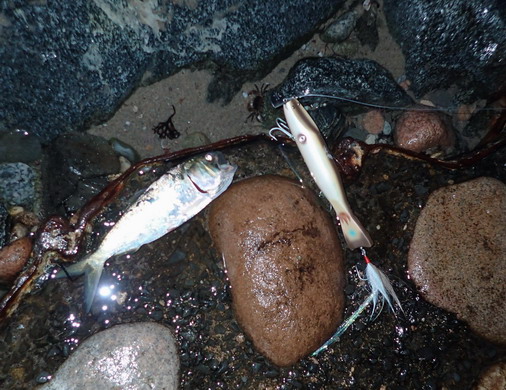 Instincts took over, I nudged the live bunker back into the water and tossed the dead bunker in and was rewarded by a swirl! These were big bunker (13”) and I wanted to know what size fish I was dealing with. I put on the biggest plug I had with me – a SLIM Troller Weasel in “Custom Porgy,” an 11” plug. All the while I am noticing the red light across the cove going on and off, thinking he must be into fish! I cast parallel to the shoreline swimming and waking the plug on top. With thanks to filming and editing by Pete Christy, the video below, while taken in daylight at the same jetty location (not on Commando night), will give you a sense of what the plug looked like swimming through the water that night:

In the moonlight, I could see a big wake following the plug! On the next cast there was a fin following the plug. A third cast resulted in a few solid strikes but no takes. Then, in quick succession, I caught an 18 lb. Striper followed by a 10 lb. Blue, then another Striper around 40”. 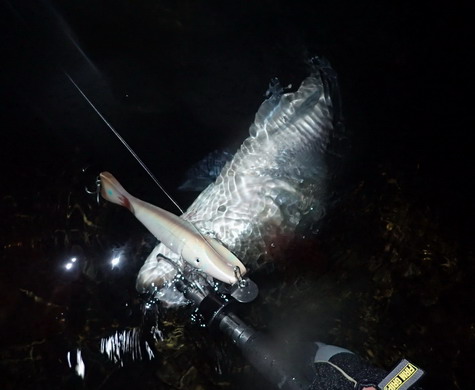 A few more follows of wakes and fins and I dropped down in size to a Pike Darter. Then it was a fish or strike on every cast for the next hour, nothing bigger than 20 lbs. I worked my way out on the jetty as the fish went out with the tide. I was midway out on the jetty when I caught my last fish. 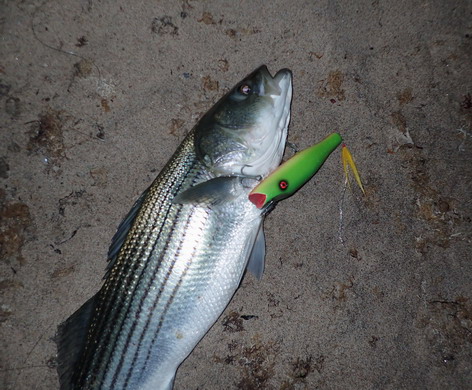 I moved up and down the shoreline but I couldn’t re-connect with that group of fish again. My one disappointment was I couldn’t coax a bigger fish out of that school – either there weren’t any or the calm conditions made it too hard to fool a big one. I fished out the night at my last two spots but never had another hit.

It was getting light, and it was time to work my way back to the ferry, and the long drive home. On this drive, it would be easy to stay awake going over the events of the night!! In all the times I have fished Block I can count on one hand the times I have encountered big bunker and all those times have been memorable!

Who Are Those GRS Junkies?
In 2016, fisherman Tom Godbout formed a Facebook group called GRS Junkies. He did so to provide a forum to buy or swap hard-to-get Big Water plugs as well as to provide a real-time opportunity to share collections, fishing stories and tips on how to best fish my pikes. At the time, he expected to reel in about 80 to 100 like-minded fishermen, but largely by word of mouth, has far exceeded that initial expectation. More than 580 fishermen from Maine, Massachusetts, Connecticut, New York, New Jersey and beyond meet up on the site to share their passion around fishing and to learn from other fishermen.

About 80% of the site’s activity is around fishing stories, tips and learning and 20% of their activity pertains to buying or swapping BWP plugs. To their credit, purchase prices are restricted to the original price of the plug, plus taxes and fees – no scalper prices to be found here! Sales and swaps are on a first come, first served basis.

A couple of years ago, GRS Junkies sponsored a fishing tournament with prizes that included a BigWater plug and other fishing gear. They hope to do this again in the near future and, of course, I’ll do my best to support them with prizes! (There are more ways to skin a cat than by attempting to be among those few first emails in a BWP online sale!)

And here’s the most important part:  you can become a GRS Junkie, too. Sign up is easy, right here:

Not Strictly Surfcasting – but Interesting
A new addition to our newsletters – when we come across interesting fish-related news….

Where Did Fish First Evolve?
Some had armor and spikes. Many lacked jaws. They evolved in the shallow coasts around supercontinents and they were some of our earliest ancestors. Read about how fish evolved in this fascinating article.

Tokyo Fish Market Makes Room for the 2020 Olympics
For more than 80 years, 900 licensed wholesalers at Tsukiji’s inner market have sold 3,100 tons of fruits, vegetables and, most famously, fish per day to Tokyo’s citizens. On Sept. 15, 2018 the last group of tourists lined up in the wee hours of the morning to secure one of 120 coveted spots to witness the final tuna sold at auction; on Sept. 29, 2018 the facility closed to make room for the 2020 Olympics. Read about this piece of history here.

Coming Soon…Jeweled Pike Sale
Mark your calendars! On Friday, December 14, I will hold an online sale of 10 Jeweled Pikes. We will release photos and the inventory on Monday, December 10. Just in time for Christmas. Nice.

All for now. I hope you and yours have a wonderful Thanksgiving. We have much to be thankful for.

PERMISSION TO REPRINT: This article may be reprinted provided it appears in its entirety with the following attribution: © Copyright 2001-2018 BigWaterPikes.com. Reprinted by permission of Gary R. Soldati.