Fishery Management – Let’s Do Our Parts!

I had long fished freshwater, but in 1981 I became obsessed with surf fishing. It just so happened the bass were in decline during that time so I didn’t see one for my first 5 years surfcasting, let alone catch one. I was new to this type of fishing and chalked up my lack of success as part of the learning curve. I was chunking the beaches during the day and there were a lot of big bluefish around, so I just went with it. It wasn’t until I gained some experience, started fishing at night with live eels that the problem with striper stocks became apparent to me.

Back then there were some really big fish (that I was too inexperienced to catch) and a lot of small fish too small to keep. The saving grace was the ‘82 year class of striped bass was a big one and the Atlantic Coast fisheries management decided to protect it. As the ’82 year class grew, so, too, the protected limit. If memory serves, the lengths went in successive years from 28” to 31” to 33” to 36”, leading to a moratorium. I remember when the size limit was 36” and I was fishing live eels and catching a ton of 33 to 34” fish, but nothing to keep.

Jump to the present. My experience, and that of many other fishermen I spoke with this past year, was an abundance of smaller fish and hard to catch anything longer than 34”. This seemed to be the max around with an occasional 20 pounder. So, hopefully the fisheries people will protect this large school of smaller fish past the current 28” (as they did in the ’80s).

Until they do, I’d like to see all of us fishermen do our parts to protect our sport for the long term! As a passionate surfcaster and plug maker, this is a hard article for me to write. In prior years, while I pretty good about adhering to fishery limits, in my heart I would have been clam-happy to have fished my brains out, living off the ocean and eating the fish I caught every day, fishery management be damned. After all, I’m just one fisherman – the real overfishing lies in the commercial and sport boat catches, right? But these days with the dramatic negative effects of climate change/warming oceans around the world, and the bleakness of this past season particularly, I’ve tried hard to be more objective about the issue of fishery management, and have come to the conclusion that making it everyone else’s fault is pretty narrow thinking.

I know this can be a controversial topic with strong feelings on both sides of the equation. This article is my attempt to T-up where striped bass fishery management seems to be currently and set forth steps that I, personally, will take in this regard. I also want to seek feedback from you, my Big Water Pike community, on this topic. So, please, read on…

If you read most any saltwater fishing magazine in February 2019, you likely found an article on the state of striped bass fishery management. It was hard to escape. The timing of these articles was not some random event given that the Atlantic Striped Bass Management Board of the ASMFB (Atlantic States Marine Fishery Board) was presented with the preliminary results of the 2018 benchmark stock assessment ( based on 2017 data) in February. That this timing followed an almost universally described “lousy” 2018 fishing season shouldn’t go without mention. As well as a mediocre 2016 and 2017!

According to ASMFB’s website, the preliminary results indicate 2017 female spawning stock biomass (SSB) was 151 million pounds – well below the SSB threshold of 202 million pounds – indicating the stock is overfished. Fishing mortality (F) in 2017 was 0.307, above the F threshold, also indicating the stock is experiencing overfishing. Bear with me, I don’t like reading data and looking at graphs, but this info is important for all of us who fish for striped bass. 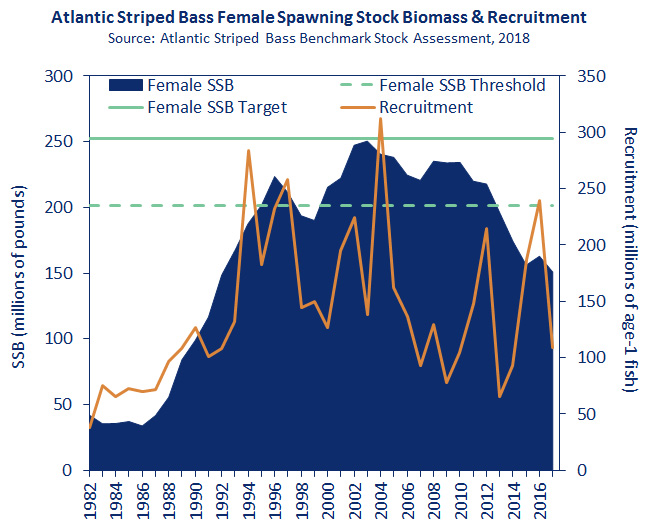 After the review, the Board discussed the need for adaptive management, but also decided to delay development of a revised fishery management plan until it can formally review/approve the final assessment and peer review panel reports.

One February article that stood out for me appeared in The Fisherman online, called Playing the Slots by Toby Lapinski. In it, Toby refers to the highly successful limits placed on the overfished redfish/red drum fishery in Florida in the late 1980s. That strategy called for protecting female redfish/red drum that had reached sexual maturity. For striped bass, this is somewhere between ages 4 and 8, equal to a length from 21” to 32.”

Toby goes on to say that we also know almost all striped bass in excess of 40” are females, and it is well-documented that when the end goal is species recovery, it is best to remove the males and leave the females. The science behind this concept is that it only takes one male to fertilize many females so by reducing the male population you do little to hurt reproduction.

Per Toby, this suggests that we would need to protect striped bass in excess of 32” on the high end. Yet, today’s regulations do the exact opposite, prohibiting harvests on fish below 28”, smack dab inside the range of sexual maturity. And, with emphasis on taking the largest fish possible by tournaments and egos alike, we are further targeting the large females of the species – seemingly counter-productive to ensuring a healthy, robust and self-sufficient stock.

Toby concludes with an idea based on the foregoing science and fact: if we want truly successful striped bass management, we anglers would have to be willing to accept a slot limit somewhere in the range of 16” to 24” (somewhat arbitrary but inside the ranges outlined above.) In closing, Toby acknowledges that such a slot limit may well not be practical.

I like the idea of a slot limit, but if we enacted Toby’s low limit now, we would be targeting our current large group of small fish that I think need to be protected as was done in the ‘80s. (There was a big year class in 2011 now in the 28” range and another just slightly smaller big year class in 2015, growing to the 15” to 18” range in 2018.) Once these classes of small fish reach maturity, then a slot limit could be highly effective.

This is going to be painful no matter how you cut it. With the decline of striped bass there could be many fishless nights. I began to notice this in 2016. The fish didn’t seem to be around when I did my commando trips to the mainland. At first, I attributed it to testing a new plug that maybe wasn’t catching. Then, in 2017, there just weren’t as many fish at Block, and what fish were there were on the smaller side. There also wasn’t as much bait (sand eels) so most fishermen I spoke to blamed the lack of bass on the lack of bait. Jersey guys with virtually no spring run at home made the journey to the Cape Cod canal for the 7-week blitz which pretty much masked the problem. But outside the Canal, the fishing was poor. This trend continued into 2018, again with the exception of the Canal which was good, but no repeat of 2017. More small fish, fewer fish longer than 34”.

On Block last Fall, I remember turning to my fishing buddy and asking “Where are the fish?” My experience on Block has always been there are always fish at the Island – you just have to find them. This particular trip we were having a hard time finding them, and when I made this statement I was referring to where on the Island the fish were. He turned to me and bluntly stated “They’re all DEAD!” That is when it hit me! The striped bass stocks were in DECLINE and I wanted/needed to be part of the solution. I admit I have been slow to the table on this issue, due to some denial and greater reluctance to change or give up any aspect of my cherished surfcasting.

These are tough pills to swallow, especially for me – a big bait, big fish guy. And with no big bluefish around to soften the blow. But, in my heart of hearts, I know it’s the right thing to do. I also believe that leaders lead – a role I didn’t ask for, but one, I think, that goes along with the visibility of Big Water Pikes.

So, here goes.  Going forward my commitments are:

And here are my requests of you:

Like many of you, I don’t like to be told what to do by someone else. So, I hope I’ve just kick started some extra thinking  about these issues that could lead each of us to do our respective part, whatever that may be.

Please don’t forget to email me your thoughts on this topic with FISHERY MANAGEMENT in the subject line!